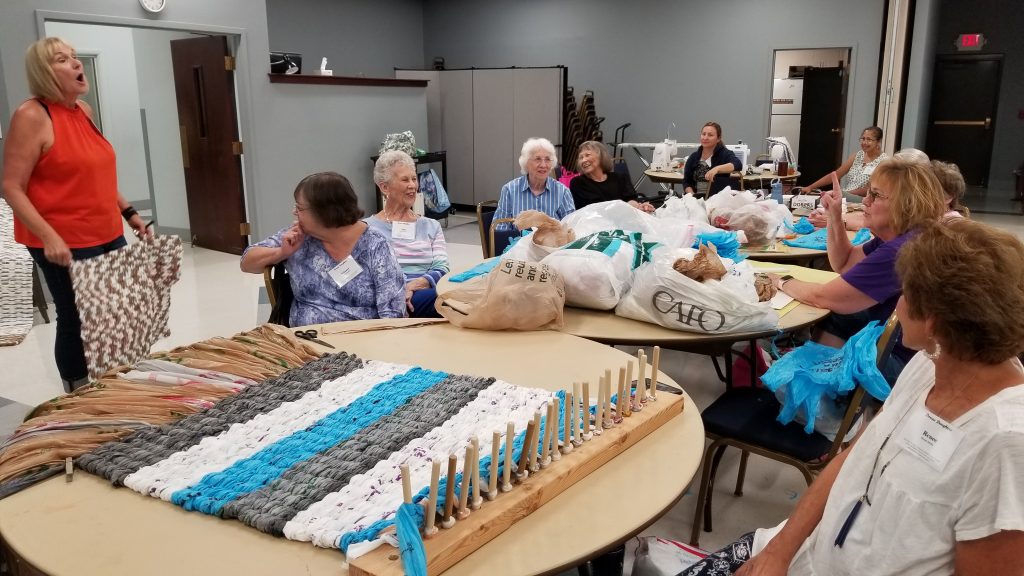 Would you believe that a cute and functional handbag could be made from . . . plastic bags?

Yes, those plastic bags. The ones we’ve been collecting for ages in our kitchens and garages.

The Dorcas Daughters ministry at the West End Assembly of God are repurposing these plastic bags into mats, jump ropes, handbags and more.

Each Thursday, they meet at the Henrico County church to work on their creations. They’re fueled by coffee and sweet treats, but mostly by the knowledge that they’re helping others. 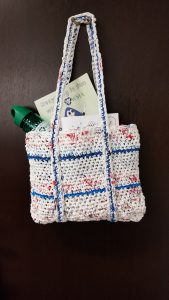 One of Dorcas Daughters’ handbags made from plastic bags.

Dorcas Daughters is named for a woman in the Bible who sewed clothing for people in need.

“We started in 2016 with just a handful of ladies,” said Deb Farlow, the group’s spokesperson. “Now, we have between 20 and 30. The ladies come each week for friendships and the fellowship. They sit together and talk while they work, and they know they’re helping people.”

The help is reaching near and far.

Local nonprofits in Virginia distribute the 6-foot mats to people sleeping on the streets. The mats provide a cushion and waterproof barrier against the ground.

Dresses, shorts and sustainable hygiene items sewn from donated fabric make their away around the world through missionaries. The last donation went to Cuba and before that sustainable hygiene kits went to Africa and Asia, with the purpose of keeping girls in school.

The group also crafts many other items that are sold locally. All proceeds support mission work.

The Problem with Plastic Bags 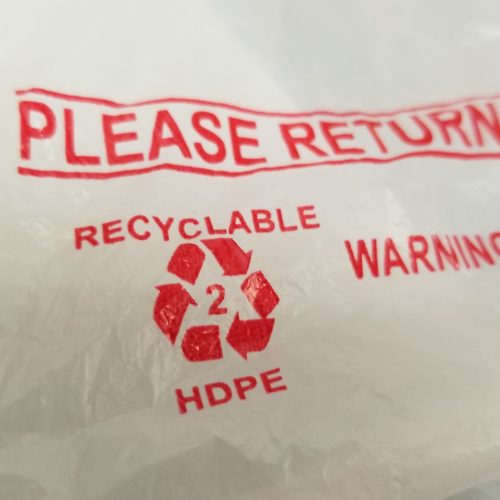 Don’t be fooled by the recycling symbol on plastic bags. They don’t belong in your CVWMA container. Return them to retailers where they can be recycled through special programs.

CVWMA instructs people to return plastic bags to stores where they’re ultimately collected and recycled in a special program.

As litter, plastic bags are lightweight and can easily blow into trees or water bodies where they harm wildlife.

It’s unclear how long plastic bags take to decompose, or if they ever do.

Dorcas Daughters are giving a second life to these problem plastics.

“This is a great example of ingenuity and kindness from these exceptional citizens,” said Cary Drane, a member of the CVWMA Board of Directors who represents Chesterfield County. “They are turning everyday throw-away items into a significant benefit for many.” 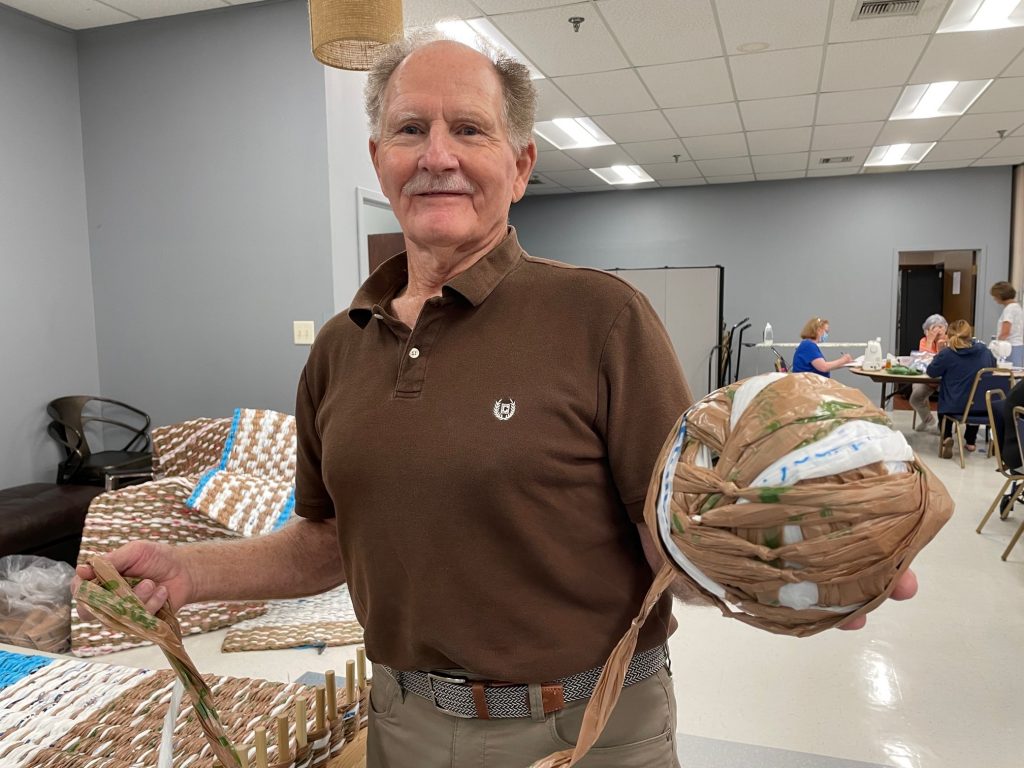 Terry Biringer holds a ball of “plarn” he made from plastic bags. Plarn is weaved on a peg loom to make large sleeping mats. 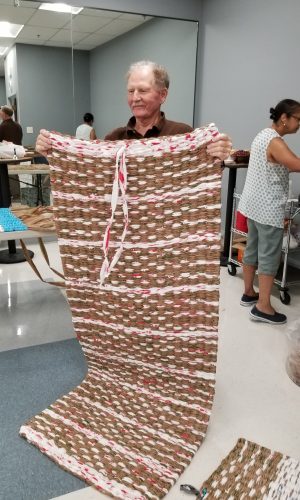 The first step to crocheting with plastic bags is making what’s called “plarn,” or plastic yarn. Dorcas Daughters divvy up the work assembly-line style. One person flattens the bags and cuts them into 6-inch strips. Another ties the strips end to end, forming a large ball of plarn. A third person then weaves the plarn onto a peg loom.

The peg looms were handmade by Terry Biringer, the husband of Dorcas Daughter Dorothy Biringer.

He learned how to make them from watching YouTube videos.

“Once Terry made the peg looms, the process became much faster and much more consistent,” Farlow said. “It used to take three to four weeks to make a mat. Now, it’s a fraction of that time. We’ve even taught other church, community and school groups how to do it this way.” 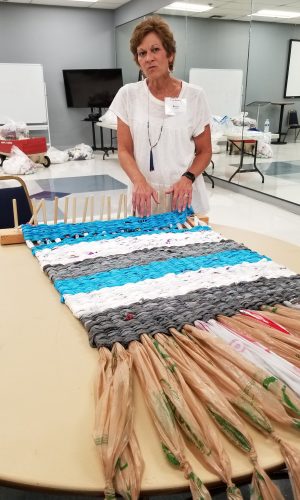 Renee White works on a mat that will be donated to someone in need.

Renee White calls the mat-making process therapeutic. On a recent Thursday morning, she expertly works the plarn around wooden pegs, completing large sections of a blue, white and gray mat (keen observers will know what stores these bags came from!).

White didn’t have a lot of crafting experience before joining the group.

“I learned how to do this from the other women,” she explained. “As Deb said, we build friendship. I look forward to seeing everyone here.”

While White and others work on mats and plarn, other women are sewing children’s shorts and dresses. Soon, Dorcas will be gearing up to make all the components of the sustainable hygiene kits.

There seems to be no limit to what the Dorcas Daughters can make, or the people can they help.

The group was recently featured during NBC12’s “Acts of Kindness” segment.

“Each handmade item and mat we make is a different work of art,” Farlow said. “We’re always challenging ourselves to get even more creative, better and faster at our crafts.”

Follow Dorcas Daughters at WEAG on Facebook and stay tuned for a craft show coming soon! Anyone interested in visiting the group or donating plastic bags or fabric and sewing notions should email dorcasdaughtersatweag@gmail.com.

Visit our Event Calendar for event in your area

View your collection schedule and sign up to receive collection day reminders!


Our mascot, R3, also has his own Facebook page.
Translate »